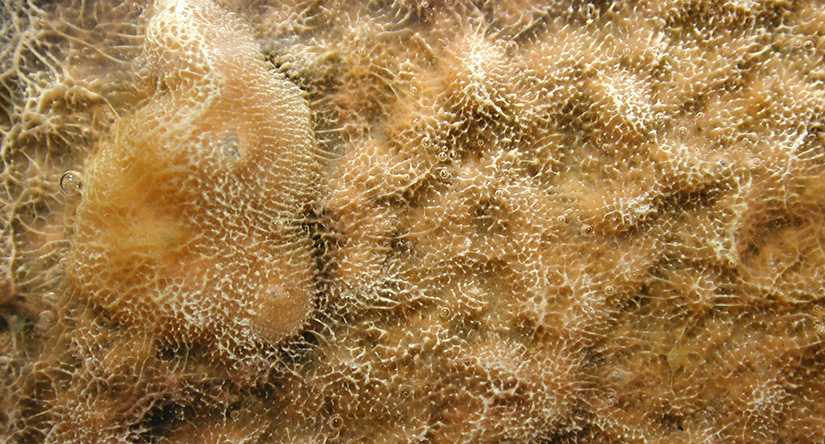 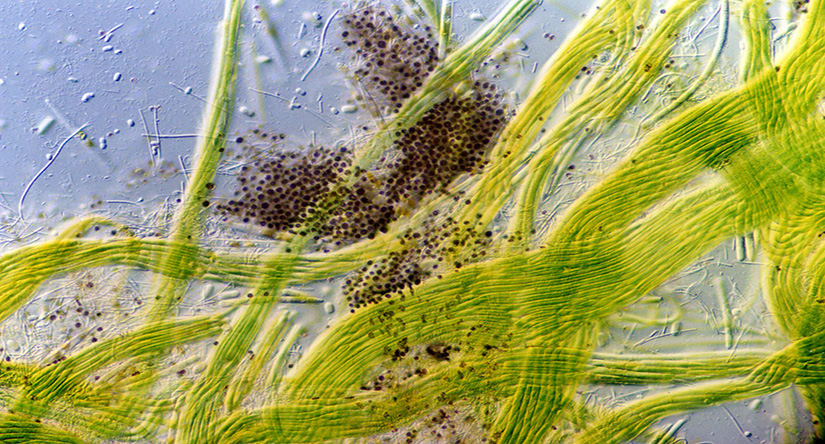 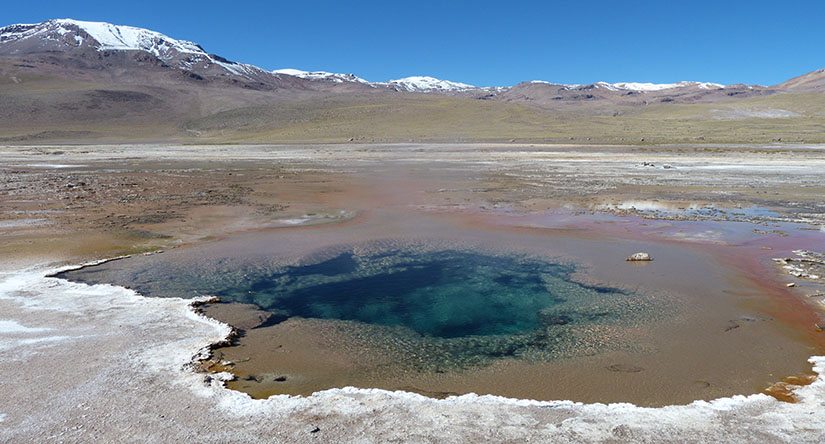 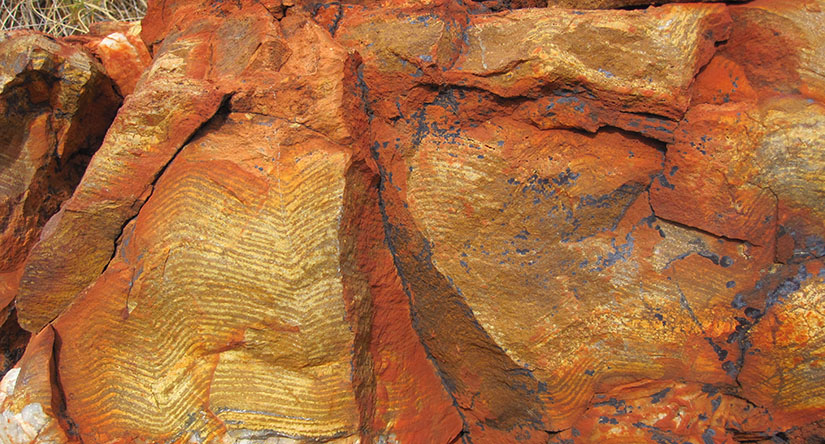 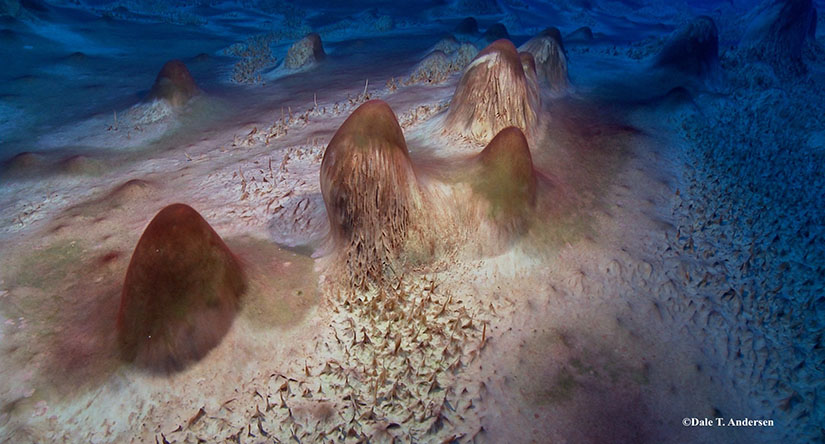 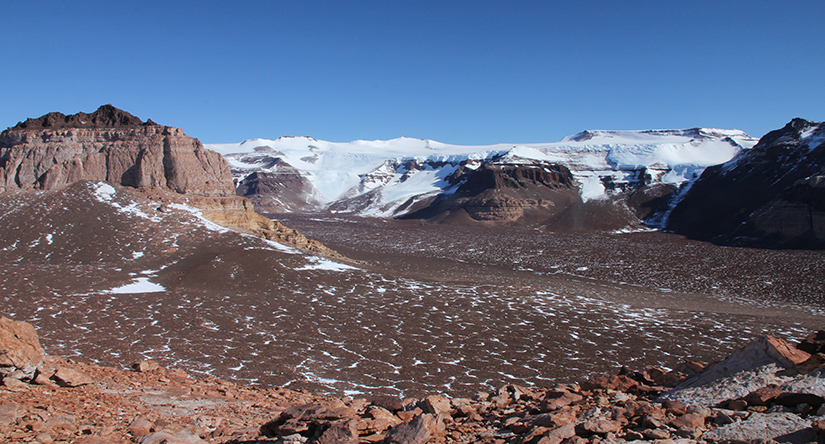 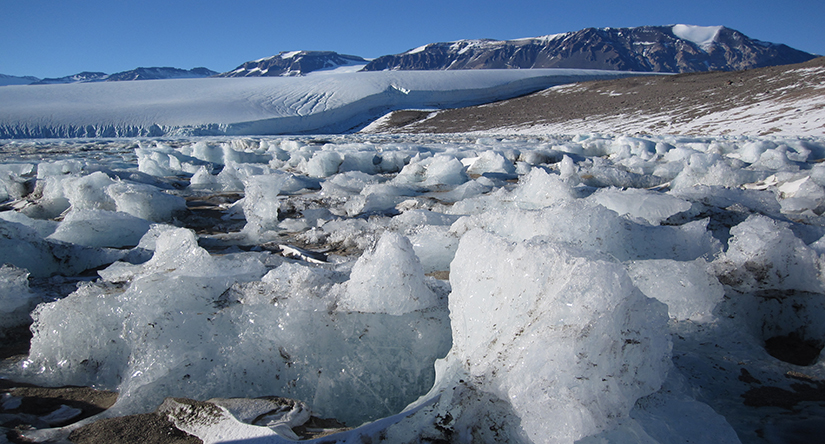 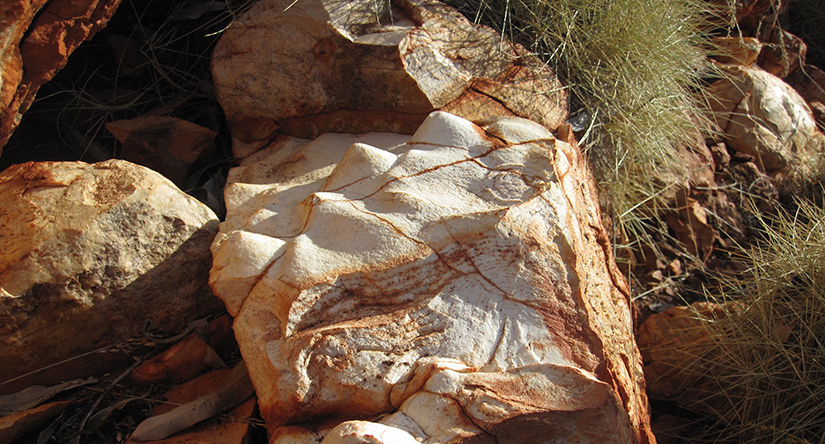 The filamentous cyanobacterium Coelofasciculus chthonoplastes and small spheres of purple sulfur bacterium are just a few representatives of a complex and diverse microbial mat from Area 4 in the Exportadora de Sal saltern system in Guerrero Negro, Baja California Sur, Mexico. Cyanobacteria – photosynthetic prokaryotes - were responsible for the increase in atmospheric oxygen ~2.3 billion years ago.

The Salar de Llamara, located in the northern Chile in the Atacama Desert, contains a number of hypersaline pools. These pools, with salinity ~130 ppt, and the gypsum heads seen underwater harbor endolithic microbial communities.

These 3.5 billion year old fossilized stromatolies formed from the activity of some of the earliest forms of life on Earth. The layers represent periods of bacterial growth.

Microbial mats take the shape of cones and pinnacles at the bottom of Lake Untersee, a perennially covered lake in eastern Antarctica. As the lake level drops, these mats are naturally freeze-dried. This environment serves as an analog to early ecosystems on Earth and potentially Mars, helping scientists to understand taphonomic conditions in cold, arid environments.

Picture of Beacon Valley, in the McMurdo Dry Valleys of Antarctica. Buried under the rocky surface there is 8 million year old glacial ice.

The Yungay region of the Atacama is one of the driest on the planet, with just a few millimeters of precipitation annually. Because of the extremely dry conditions, many of the physicochemical conditions are analogous to those found on the surface of Mars including the presence of perchlorates. In this environment, organisms are confined to habitats that preserve or accumulate water, such as deliquescent salts. Biomarkers are well-preserved for long periods of time due to the dry conditions.

Picture of the surface of Lake Joyce, in the McMurdo Dry Valleys. The lake is ice covered all year around, and the icy surface is constantly reshaped by wind, freezing and thawing. Thick microbial mats inhabit the lake beneath the ice cover.

Small fossilized conical stromatolites in Pilbara, Australia. These stromatolites formed 3.5 billion years ago and represent one of the oldest evidence of life on Earth.